The amount of house fires in South Yorkshire is the lowest it has been for 10 years, the county’s fire service has revealed.

Importantly, the fire service says, it is the first time since records began that the amount of yearly accidental house fires has been in the 400s.

“It goes without saying that this is excellent news and testament to the hard work of our staff over the last decade – during what has been a challenging time for the public sector,” said Area Manager Simon Dunker, head of the joint police and fire community safety team.

“Every home safety check, every school visit and every safety campaign has contributed towards this reduction and we must also note the co-operation of each and every member of the public who has taken on board our safety advice.

“There’s still more to be done, though. The 472 accidental house fires we had last year were 472 too many and our work to make South Yorkshire safer and stronger will carry on into the next decade, and beyond, to try and reduce these incident numbers further.”

The service has also unveiled the number of home safety visits its staff have done in the last few years, with 68,000 being logged since the start of 2016, four years ago.

Fire services are required, by the Fire and Rescue Services Act 2004, to promote fire safety and proactively help reduce the risk their communities face.

This means undertaking things such as home safety visits and safe & well checks, visiting schools and developing partnerships with other agencies that help benefit the public.

South Yorkshire Fire & Rescue also prides itself on being one of the country’s leading fire and rescue services when it comes to delivering community safety campaigns.

Its recent Protect Your Pets campaign helped reduce electrical fires by 30 percent – whilst the Do Your Bit campaign drove down deliberate fires set during the summer months.

Please note that all car wash events during March have been cancelled.

Firefighters will be washing cars throughout March as part of a national charity event.

The events are aimed at raising money for The Fire Fighter’s Charity, which supports injured firefighters and their families.

The following stations are taking part in the annual event during March.

Why not pop along to one of the above and get your car cleaned all in aid of The Fire Fighters charity.

A South Yorkshire teen has started an apprenticeship with a major Sheffield manufacturing firm, thanks to a fire and police led youth course. 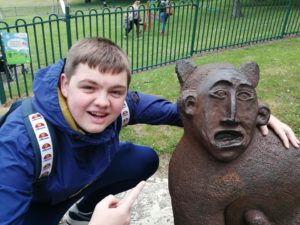 Jay will be employed in the moulding section and will travel to Birmingham once a month to fulfil his training obligations.

Jay said: “If it wasn’t for the Team Programme I would still be sat in my bedroom wondering why no-one was offering me a job. This has focussed my job search and the impact has been proven by the number of positive responses I have received since. I am really looking forward to starting my new apprenticeship and would like to thank everyone for the help getting here.”

He’s the second course participant to have secured employment at William Cook, after Joe Rodgers earned a role as an apprentice pattern maker. He’d previously spent a fortnight on work experience at the firm- walking an hour and a half to get to work each day. really helped me improve myself for the better. It improved my prospects and gave me a clear path to a job that I am loving. I never saw myself in this role and instead thought I would work in retail. My time on work experience really opened my eyes to the jobs available. I would like to thank John, Andy and all the team at The Prince’s Trust and Kevan at William Cook for the opportunity of work experience that led to this role.”

South Yorkshire Fire & Rescue and South Yorkshire Police teamed up with the Prince’s Trust to deliver the Team Programme three years ago. During that time more than 200 young people have benefited from the 12 week personal development course for unemployed 16 – 25 year olds, offering work experience, qualifications, practical skills, community projects and a residential week.

The courses are based at fire stations and are the only programmes of their type in the country to be jointly delivered by fire and police services. For more information or to sign-up, email princestrust@syfire.gov.uk

Young people are learning life and social skills thanks to a fire service funded project.

In partnership with JADE Youth and Community Centre, we are helping hundreds of young people with activities that enable social, educational, economic and employment opportunities for their life progression.

The two year funded project, has been running for over a year and has seen great success with children from as young as 7 years old benefiting from the activities, projects and educational talks delivered.

Head of the Joint Community Safety Department Steve Helps said; “JADE has made a real impact on the lives of the young people who attend, offering a place to socialise and also to learn life values with the help of the amazing youth workers there who offer support and advice.”

A spokesperson from JADE said; “We really appreciate the support received from South Yorkshire Fire & Rescue (SYFR) , the funding provided has enabled us to deliver much needed activities for children, young people and the wider community, creating a wide range of positive outcomes that support young people and address key community safety issues.

“Through our SYFR funded project, young people have taken part in educational activities that cover a diverse range of issues such as fire, road and water safety, drug and alcohol use and crime and offending, whilst being in a safe environment where they can socialise, access support and have fun.”

A number of South Yorkshire fire stations will be holding an open day this summer. Please see list below for details.

South Yorkshire Fire & Rescue is proud to be holding the inaugural Fire HIIT Games along with the Dearne station open day.

Events will range from hose dead lifts, ladder presses, casualty carries and tyre flips.  Each competitor will be timed with the fastest total being announced the winners.

All profits raised will go to The Fire Fighters Charity.

The event is open to everyone, not just fire service personnel.

For further information or to register for the event email nabbott@syfire.gov.uk (please note only registered competitors will be able to compete on the day).

While the above event is taking place Dearne fire station will be holding their annual open day running along side the Fire HIIT Games.

The open day will start from 10am and will include:

Please note that there is limited parking on site.

A fire service funded project in South Yorkshire is helping to prevent trips and falls in older people in their homes.

The Edlington Community Organisation, in partnership with South Yorkshire Fire & Rescue (SYFR) has been inviting older people (50+) to bring along their old slippers and exchange them for a new safer slip-resistant pair for free.

The two year slipper swap project aims to be used in conjunction with information events to encourage the elderly and vulnerable into community venues to access other support focusing on fall prevention, Safe and Well checks and dementia awareness.

Since the start of slipper swap over 1,000 pairs of slippers have been given out along with 200 fire safety kits and 70 Safe & Well referrals.

SYFR Head of Prevention & Protection Steve Helps said; “The project so far has been really successful with a large number of Safe & Well referrals generated which has strengthened our knowledge and referral scheme through collaborative working with our partner agencies.

“It has also made it possible for older people in the community to live safer and be more prepared for living in their own homes in the future.”

Samantha Siddall at Edlington Community Organisation said; “A pair of slip resistant, fitted slippers not only stops you from falling but also reduces the pressure on emergency services and ensures older people remain independent and active. The free slippers are also a great way to get people into other services and accessing a variety of information and advice within their community.”

Firefighters will be washing cars throughout March as part of a national charity event.

The event is aimed at raising money for The Fire Fighter’s Charity, which supports injured firefighters and their families.

As well as washing cars, firefighters will also be on hand to offer fire safety advice.

The following stations are taking part in the annual event on the dates specified.

Why not pop along to one of the above and get your car cleaned for a donation all in aid of The Fire Fighters charity.

A number of fire stations across South Yorkshire will be holding a family fun day during the summer.  The full list of stations are below:

There will be a range of activities for all the family at each open day including:

South Yorkshire fire cadets have been honored at a ceremony in Sheffield to mark their achievements.

More than 20 cadets, aged 13 to 17, were recognised in front of friends and family at the event at the fire service’s Handsworth training base, for successfully completing their Level 1 and Level 2 BTEC in Teamwork and Personal skills in a Uniform Organisation.

Cadets train at their respective stations once a week, learning firefighting skills and techniques from specially qualified instructors. They also play a key role at community events and take part in team-building days throughout the year.

Cadets enrol on to the CVQO education package, which covers the employability skills needed to work within the health and emergency services. The young people had 12months to work towards a recognised qualification, with certificates for successful completion of the programme handed out at last week’s event.

Station manager Matt Gillatt, said: “Our fire cadets scheme has a long and proud history. Over the years the scheme has evolved to provide a much more rounded mixture of skills and training, including community work and exercises to build personal confidence and employment skills.

“South Yorkshire has one of the most successful fire cadet schemes in the country, so it is right that we recognise the achievements of our youngsters in this way.”