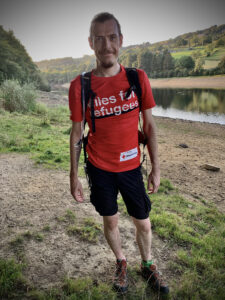 A Sheffield man is attempting to ‘run’ between Calais and London in a bid to raise cash and awareness for refugees.

Steve Kay, aged 36, has already clocked up 50 miles in his 108 miles mission to support the British Red Cross, which offers support, food and hygiene to refugees and people seeking asylum.

Steve, who works in the ICT team at South Yorkshire Fire & Rescue, said: “2020 has been a tough year for many people across the world, but most of these hardships are a drop in the ocean compared to the horrors that refugees face in search of a better life for themselves and their families. Many refugees are forced to flee war-torn countries and are left with nothing, and the British Red Cross offer a vital lifeline in the form of supplies, communication and transport that serves to help them start a new life.”

Steve aims to have reached his mileage target- which matches the distance between Calais and London- by the end of September.

He’s already raised more than £400 for the British Red Cross, which aims to help people in crisis whoever and wherever they are.