Fire crews from Parkway station were called at 11:50am on Wednesday to reports of two terrier dogs stuck down a rabbit hole.

When the crews arrived at Stone Lane in Sheffield they were met by the owner of the dogs, who had been out walking them at the time.  Firefighters were able to release one of the dogs straight away, however the other was further inside the hole.

Firefighters were able to dig down and managed to find the dog which was then reunited with its owner.  Both dogs were safe and well, but did go to the vets as a precaution. 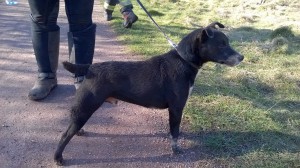