A century after Sheffield became the first fire service in the country to use a turntable ladder, the very latest vehicles to rescue people from height have come into service.

South Yorkshire Fire & Rescue (SYFR) has two new turntable ladders, believed to be the best specification vehicles of their kind anywhere in the world.

The vehicles have been manufactured by German firm Metz XS and supplied to SYFR through the Rosenbauer Group in the UK.

After specifications were submitted by companies interested in providing the vehicles, extensive testing by a working group consisting of staff in various roles across the fire service took place.

The L32A model has superior accuracy and agility compared to the services current aerial ladder platform (ALP), deploying in 90 seconds it is also much faster in its operation. Its ladder can reach 32 metres and has the ability to work below the horizontal axis.

The vehicles cost a combined £1.2 million and arrived in South Yorkshire earlier this year and have been kitted out and used for training by firefighters before going on run at Doncaster and Parkway fire stations. 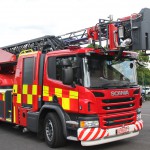 Area Manager Phil Shillito said: “Aerial appliances are important vehicles because they allow us to tackle fires from above and rescue people from height in a way we are not able to do with a traditional fire engine.

“These turntable ladders were chosen with the help of the people who will use them every day- frontline firefighters. The overwhelming feedback was that these appliances are the best specification vehicles currently on the market.”

Sheffield Fire Brigade- one of the four district brigades which went on to form South Yorkshire Fire & Rescue in 1984- became the first fire service in the country to use a turntable ladder in 1903.

The German built horse drawn vehicle was bought after Superintendent William Frost had first spotted it at a fire exhibition in Earls Court, London.

The appliance was converted to a motorised vehicle in 1921 at a cost of £1,200- more than £50,000 in today’s money- and was stationed at West Bar police and fire station, now home to the National Emergency Services Museum.

“We have a long history of using the very best resources to provide emergency cover to the people of South Yorkshire. These vehicles are testament to the fact that, in spite of the current challenging economic backdrop, we will continue to provide the very best firefighting resources to our frontline crews,” said Phil.