The service is today, Monday 22 July, launching its ‘Do Your Bit’ campaign to tie in with the six-week holidays – which figures show is prime time for these types of fire.

As part of the campaign fire officers are asking people to be extra careful with barbeques, hold off on garden bonfires and take specific action to reduce the risk of arson in their areas.

This includes only taking wheelie bins out on the morning of collection, rather than leaving them out overnight, ensuring streets and parks are clear of loose rubbish and reporting suspicious behaviour to South Yorkshire Police on 101.

It is hoped that, combined with a range of prevention work that the service has already done around this issue, the campaign will result in a reduction in incidents during the summer period and, ultimately, less strain on resources.

“This campaign ties together a lot of work that is being done across South Yorkshire – including arson prevention patrols by our fire crews and a programme of ‘light nights’ school visits by our community safety team,” said Station Manager Matt Gillatt, who works within the joint police and fire community safety department.

“Last summer was great for so many reasons but it was also unusually busy for us as a service. We were called to 1,560 deliberate secondary fires (grass, rubbish, bins, scrubland) in July and August alone – which is well over double the 692 we attended the year before.

“This is just one incident type, too. On top of the secondary fires are things like vehicle and accidental garden fires – and of course we’ve still got things like road traffic collisions, house fires and water rescues to deal with.

“Whilst we can’t control the weather we’re keen to try and crack down on some of these incidents – as clearly small fires all have the potential to spread and put people at risk. Fortunately, our insight suggests that many of them could have been prevented.

“This is why we’re asking the public for their help – by taking our advice and being a bit more vigilant around fire during hot weather we think people can make a real difference.”

As well as the arson prevention patrols and school visits, the service will be releasing a series of videos during the summer showing the impact that these incidents have on staff.

Firefighters will also be working with farmers to ensure they have adequate arson prevention measures in place, and that they know what to do should a fire hit.

Key advice to the public is:

Fly-tipping is a problem for us. Loose rubbish, large or small, can be a target for arsonists. It also makes your local area look untidy. 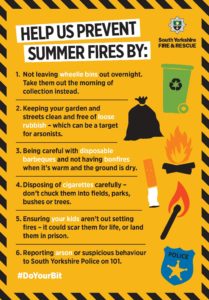