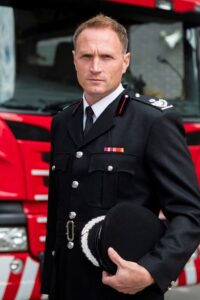 Chris Kirby was appointed following a selection process which included a written application, interview with members of the Fire Authority and presentation to members of a staff stakeholder panel.

Fire Authority Chair Cllr Tony Damms, said: “The Fire Authority’s appointments panel was greatly impressed by Chris’ obvious passion for improving the service for all those it serves and employs. His people centred approach, vision for change and determination to get things done all make him an outstanding candidate to lead South Yorkshire Fire & Rescue in the future.”

“Fire Authority members would like to thank Alex for the leadership she has shown in the role of Chief Fire Officer- particularly in leading the organisation through the pandemic and all of the challenges which that has brought and for her leadership during the 2019 floods. We wish her all the best in her future endeavours,” said Tony.

Chris Kirby said: “I am extremely proud to be offered the role of Chief Fire Officer in South Yorkshire. It is an honour to provide a first class service to the local community and to work alongside so many fantastic people.”