A volunteer at South Yorkshire Fire & Rescue has been thanked for her actions after helping an elderly couple when their car broke down on a busy main road in blistering heat.

Andy Swarek, who has been volunteering within the service for six months, was on her way home from an event in Conisbrough when she came across the elderly couple who appeared to be stranded at the side of the road.

Mavis and George White, both in their late 70’s, had broken down on a busy road in Doncaster and had been told there was a four hour wait for a recovery vehicle. Despite the soaring temperatures, Mavis and George stood for 90 minutes with jump leads at the ready in the hope that a bystander would come to their aid.

After having been passed by hundreds of motorists, it was Andy that eventually pulled over to help jump start the couple’s car.

Mavis and George said: “As we weren’t registered with a breakdown company we weren’t a priority and feared we’d be sat there for the full four hours we’d been quoted. Andy stopped, was extremely polite and even offered us some water. She was kind and patient and was sympathetic to our situation even though she probably just wanted to get home. Andy went above and beyond and is a credit to the fire service as a volunteer.”

Andy said: “I’d been sat in tailback traffic for about 15 minutes when I saw George stood by his car with one of the jump leads in his hand and the other connected to his car. Whilst other motorists seemed to be simply driving by, I pulled over to help. As soon as I stopped they both seemed to be very relieved to see me.”

Mavis and George’s daughter, Rebecca White, contacted the fire service to pass on her thanks to Andy. She said: “It might just be a jump start and a drink to some people but to my parents in their late 70’s this meant the world. Andy is a huge credit to South Yorkshire Fire & Rescue and our faith in humanity has been restored because of her actions.”

Andy is a volunteer cadet instructor within the service. Her role involves working with 13-18 year olds, teaching them about the importance of fire safety including various firefighting skills and techniques.

If you would like to find out more about becoming a volunteer at South Yorkshire Fire & Rescue, visit our website http://www.syfire.gov.uk/find-a-job/volunteering/ or get in touch with us on volunteers@syfire.gov.uk 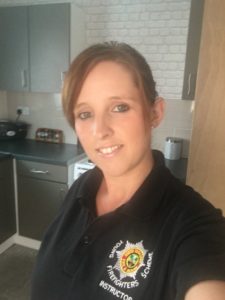